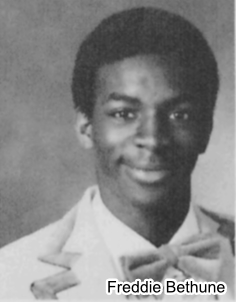 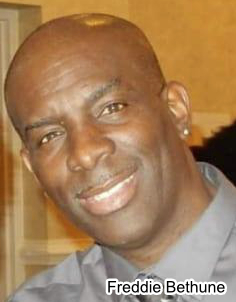 Freddy Bethune passed away Yesterday, Tragically , in a Traffic Accident .

Young Cleveland McNabb wrote : Today I found out that I lost one of GREATEST MEN in my life, he was more than a 1st Cousin , he was an Older Brother. His smile was contagious, he was a very loving, compassionate, caring and giving man.
He would give you his last, even if It meant giving you the shirt off his back , the shoes on his feet or the dime in his pocket.
For those who knew him, please send your prayers and thoughts to his family ,George Bethune and the entire Bethune family , Fred’s wife and children,the Brown family, the McNabb family.

A Pensacola man died Friday in a two-vehicle crash at the intersection of South Blue Angel Parkway and Dog Track Road.

At 7:58 p.m., Darby Paddie, 22, was traveling north on South Blue Angel Parkway and attempted to make a left turn onto Dog Track Road as Fredrick Bethune, 55, was approaching the intersection traveling south.

Paddie failed to yield to oncoming traffic when turning left and struck Bethune’s vehicle, according to a news release from Florida Highway Patrol.

Bethune was transported to Baptist Hospital, where he was pronounced dead.