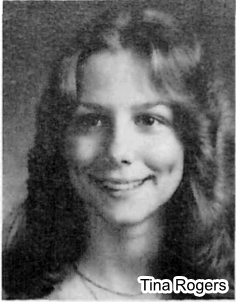 Tina was born on Nov. 29, 1962, in Valparaiso, Fla., to Jimmy and Ann (Brooks) Rogers. Because of her petite size and big, beautiful and expressive eyes, she was tagged with the nickname “Tina Bug” when she was a little child and she was stuck with it the rest of her life. She lived most of her life in Fort Walton Beach, Fla., and attended Ocean City Elementary, Meigs Middle School, and graduated from Choctawhatchee High School in 1981.

Tina worked for a while as a bank cashier, as a bookkeeper and payroll clerk for a construction company, and as a court reporter; but most of her working career was associated with her father and brother in the Professional Tree Service of Fort Walton Beach.

Tina was preceded in death by her father and mother, Jimmy and Ann (Brooks) Rogers; her grandfather, Aubie Rogers; and grandparents, Victor and Cindy Brooks.

Tina is survived by two daughters, Crystal (Bond) Fenwick and her husband David of Baltimore, and Tabatha (Tidwell) Raper and her husband Christopher of Fort Knox, Ky.; one granddaughter, Kayle Fenwick of Baltimore; one sister, Lisa (Rogers) Anderson and her husband Dale and their children Courtney and Keith of Riyadh, Saudi Arabia, and Candace Stocks and her husband Kurt and son Jaylen of El Dorado Hills, Calif.; one brother, Perry Rogers (and Susan and son Chris), and Perry’s children, Jimmy Rogers and his wife Krissy and son Kristofer, Nicholas Rogers and Sarah Kay Rogers, all of Fort Walton Beach.

Tina became a Christian and made her public profession of faith many years ago and was currently an active member of Calvary Baptist Church of DeFuniak Springs.

To honor her wishes, Tina’s body was cremated and a private service was held by her family to celebrate her life and to scatter her ashes.

In lieu of flowers, the family requests donations be made in Tina’s name to Hospice of Northwest Florida Inc., 101 Hart St., Niceville, FL 32578.